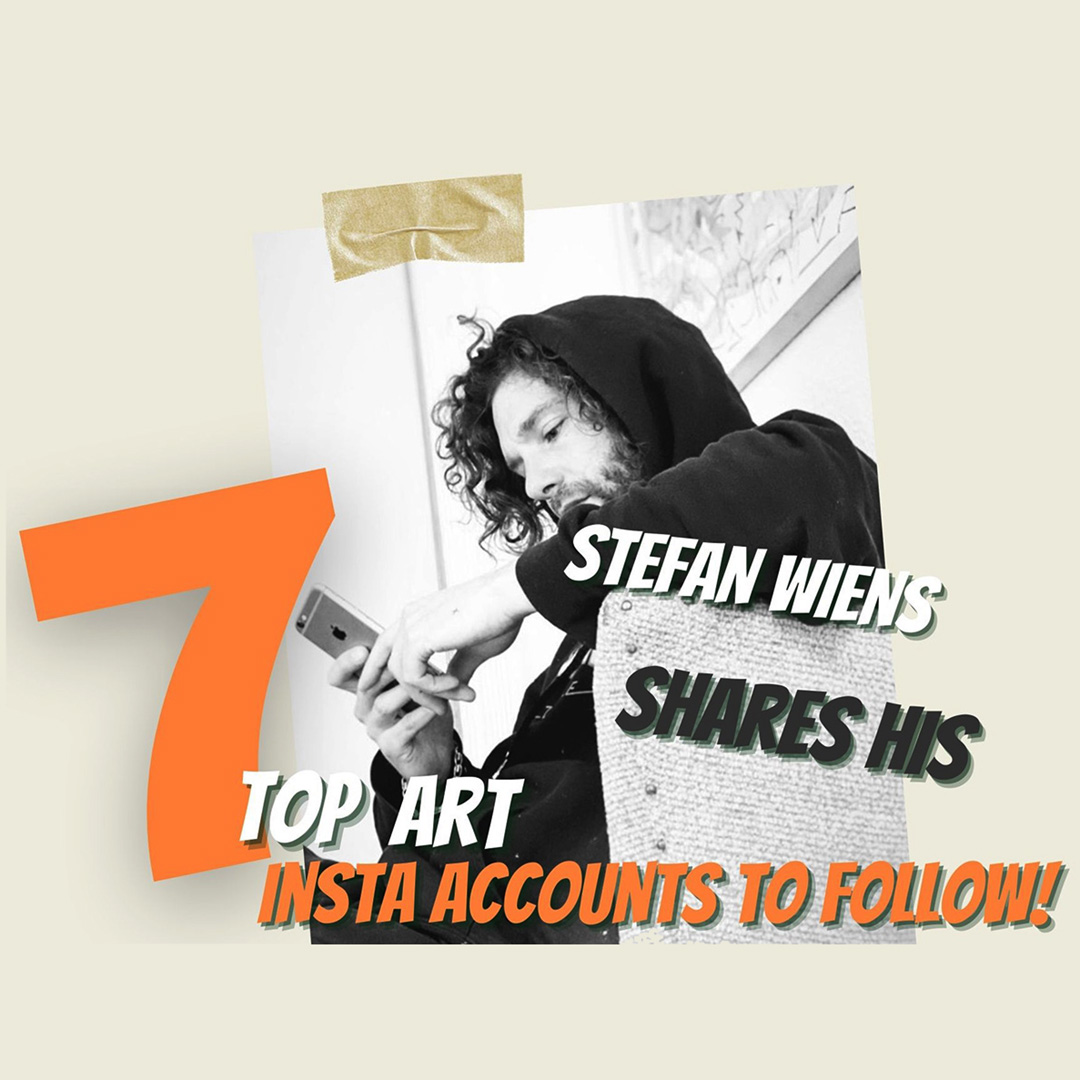 The Munchies art club invited our featured artist the contemporary visual artist Stefan Wiens to share with us and with you his favorites for our special Instagram accounts you have to follow.

It’s always such a pleasure and inspiring to encounter overlooked Insta pages, discovering in this way, new exciting and inspiring gems in a sea of talent.

Who is Stefan Wiens?

Stefan Wiens (*1986) is a painter and sculptor living in Hamburg.

Wiens' sculptures observe, comment on, question and ironize social and socio-cultural conditions. In doing so, they address the tension pair of power and vulnerability.

For his work, the artist uses artificial materials such as Styrofoam, aluminum and chipboard.

The interplay of material diversity unites classical concepts of sculpture with contemporary craft approaches, such as those derived from shell construction, vaulting, gutting, drywalling, and furniture making.

He combines chainsaw cuts with caustic acid treatment of surfaces, just as he does surgically precise cutter cuts with epoxy resin color runners.

In this way, (material) touch is determinative by the eventual outcome and a core of Wien's work.

While Wien's oeuvre can be described as classical sculpture, his motifs stem from pop and subcultural phenomena such as cartoons, advertising, rock/punk music and skate culture. This is combined with art historical citations.

Mickey Mouse consequently looks as if she had taken a shower of acid rain.

Wien's pop sculptures, some of which are several meters high, are shadowy treatises on hyper-present (anti-)heroes and (non-)phenomena such as Mickey Mouse and Batman.

The artist cuts his figures out of a Styrofoam block with the help of a chainsaw and hot wire before pouring chemical solvent over them and finally recycling them.

The result is a biting, etched surface that marks the piece. This mold is cast in aluminum and then painted. Mickey Mouse consequently looks as if she had taken a shower of acid rain.

In his jersey paintings, Wiens draws on the tradition of analytical-conceptual and minimalist painting, exploring the interplay of color and emotion.

The paintings are always subordinated to the same principle: a jersey fabric is stretched on and over a stretcher frame in a seemingly casual, almost arbitrary manner.

He buys the fabrics on Ebay, as direct imports from China, or at oriental weekly markets. Color-wise, they are often garish neon, motif-wise in stripes, camouflage or animal print.

In the process, the pattern of the jersey fabric becomes blurred and a hypnotic, sometimes psychedelic moment is created.

Although Wiens refuses to make any statement in the sense of a "narrative moment" in his jersey paintings, it becomes clear that it is precisely the connection between the narrative level and formal composition that is at stake.

Thus the patterns are formal elements, structural principles, free of any meaning and primarily apparently aimed at manipulating perception, but only formally.

Wiens finds beauty and peace in something broken, ugly, socially considered worthless, or bad taste. In doing so, he conceptually questions social, art business, and painterly traditions, predominantly also rejecting them, as did the abstract expressionists or the painters of the Neue Wilden in Germany in the 1980s.

For sure you should check out Gabrielle Graessle. Her works reminds me of childhood memories and days without concern.

Gabrielle paints what surrounds her and she likes to paint without thinking, always surrounded by music.

Thus her art is intuitive and inspired by all what captures her interest: animals, nature, fashion, films, books, news, as well as feelings, music and images from childhood up to now, without restrictions.

I’ve discovered Gabrielle‘s work some years ago and we got into contact supporting each other with critique and motivation. We will show work together in the upcoming exhibition „Like a slight hiccup“ at @lagrangegallery.

Mario Hesse founded his channel during the first covid lockdown. I’ve come across him nearly at the beginning and wondered about all the art I didn’t know :D.

Mario became obsessively interested in art throughout the pandemic, which finds its expression on his site.

Rae Hicks is a close friends and I’ve met him while my studies at HFBK when he was doing an exchange from Goldsmith.

He became a painting buddy, critique, mentor and …very important…drinking lad ☺. He’s based near London with his family and I don’t see him very often.

Nonetheless we’re in close contact about life and art. He’s a great painter, producing very skilled and silent work with a completely own and unique approach to painting.

His paintings are slow deliberations on common materials and memory triggers.

Recently, they incorporate cement, clay or wood into the process. Many of the signifiers are taken from the experience of living at the edge of cities, where different worlds blend awkwardly.

Götz (Sophie) Schramm (*1983 in Potsdam-Babelsberg) is a visual artist and investigates in particular the interface between art and politics in times of digitalization.

In paintings and intermedial, often collaborative, works, the artist addresses topics such as social cohesion, tight-wing extremism, Internet culture and the coding and commodification of emotions.

Schramm lives and works in Frankfurt am Main and Berlin, is co-founder of the art collectives SORGEN (INTERNATIONAL) and ALGOIST and the network cc:IRL.

I know Sandra Slim from her HFBK years but I’ve really starting to get into her work last year.

Her work is about turning almost everything she sees into a story and that story a painting. Solitaire scene fascinate her.

Thus, beaches, empty pools and landscapes are the principal theme of the painter’s  compositions.

Furthermore, her experiences and ways of perceiving the world produce a mixture of sinister and joyful imagery ending up in beautifully tender compositions and arrangements of rooms, animals and items.

Ivan Summersky is a self-taught artist, who acts from an intrinsic motivation, based on elements such as spontaneity and subjectiveness.

His paintings are created from vibrant colors, intense brushstrokes and simplified forms.

Color works as a vehicle of expression and energy that is calling for the attention of the eyes and the sympathy in the heart of the viewer.

The outsider artist is inspired by genres such as Brut Art and Folk Art that have used everyday objects and images as a source of creativity.

Ivan says: „I don’t try to represent the traditional idea of beauty, because I believe that art is not about portraying things as they are, but more as they are perceived“.

Christoph Wüstenhagen is another friend from my study era.

I’ve used to share apartment with one of our friends in Hamburg Wilhelmsburg at that time and we’ve spent quite some evenings there discussing exhibitions, paintings and literature.

Born in Staßfurt in 1979, Wüstenhagen deals with the processing of his aesthetic biography in his works.

Growing up in East Germany, he uses to analyze two aesthetic regimes: the socialist and the capitalist.

From the mixture of both regimes he developed his own formal language.

To generate his paintings, the artist uses a heat transfer foil, which he irons onto the fabric/silk.

Mario Hesse founded his channel during the first covid lockdown. I’ve come across him nearly at the beginning and wondered about all the art I didn’t know :D.

Mario became obsessively interested in art throughout the pandemic, which finds its expression on his site.

He finds Instagram, although unable to compensate physical presence, a great place to make art that is not so much known visible and get in touch with artists.

What Mario is especially interested in is cross-referential qualities, so he likes studying a particular artist’s influences and representing those.

Contact
Thank you! Your submission has been received!
Oops! Something went wrong while submitting the form.
HomeFeaturesMember