Contact US
Laurentius Sauer | Artist to watch out for

The main goal of featured artist | Munchies Art club is to share artist content, to give the artist more reach and visibility. Support the artist!

Who is Laurentius Sauer?

Laurentius Sauer is a contemporary painter who studied Painting and Graphics under Prof. Günther Förg and Prof. Gregor Hildebrandt at the Academy of Fine Arts in Münich, Germany.

Sauer's work characterizes two main features: chance and timeliness. The coincidence of aesthetics and quick gesture is formative for his work, but the topicality principle is decisive. Beyond these systems, the artist also repeatedly works on topics based on his own experiences and memories. -Axel Städter

Lately the artist has been working on the legend of Lady Godiva, depicting horses, strong women, and the hurt male pride.

Beyond these systems, the artist also repeatedly works on topics that are based on his own experience.

Memories from childhood, shaped by forest and nature, are just as much a part of it as the harsh climate of the city with graffiti and tangible arguments.

The result of these experiences is the constant striving for something new. The permanent questioning of the surrounding lifeworld and what he creates in and through it is a central moment in Sauer's work.

His way of working is not a dedicated work on a topic. On the contrary, the artist rejects this slow penetration, since the creative and aesthetic plug would be pulled, so to speak, from the actual act of creation.

Sauer lives the moment, the intensity of creation. His materiality and technique, the artist prefers to use pastel chalk, oil and increasingly lacquer paint, are on the one hand in the tradition of painting, but are also committed to urban space.

In his works, Sauer naturally combines an expressive-artistic gesture with the motifs of our contemporary world.

So he naturally works logos and lettering from companies or sports clubs into his images, which are familiar to us - as ciphers of the zeitgeist, so to speak.

Spraying is Sauer's tried and tested medium. The fast processing inherent in technology corresponds to the artist's claim to creation at the moment. Spraying serves as a highlight, as a statement, as the art form of the city.

Sauer pursues a clear plan, which is fed by the knowledge of the potential of an expanded concept of painting, a feeling for setting cultural reference points, and the formal language of urban and contemporary worlds. Laurentius Sauer continues this chosen artistic path consistently and not without a wink.-Axel Städter

Where the subsurface defies any kind of appropriation, Sauer sets conscious breaks by integrating the said motifs of our living and consumer world into his pictures. The artist uses these motifs as reference points to irritate.

This play with irritation is characteristic of Sauer's work and is intended to upset the viewer.

Sauer creates new contexts and makes it possible to question our own position with regard to these living and label worlds.

It is up to us - entirely in the artist's sense - to apply the principle of actuality, which is essential for his work, also to our own perception and to always take updated perspectives.

His artistic way of working is the connecting factor in the interplay of materiality and cultural (self-) referentiality.

The inner conviction that Sauer brings paint onto canvas, tarpaulin or directly onto the object testifies to an intensive examination of the material - the study of color and form in general and contemporary painting in particular. -Axel Städter

The accentuation and placement of the lines, the dynamics of the hatching never seem arbitrary, if they were implemented quickly in Sauer's style.

Sauer pursues a clear plan, which is fed by the knowledge of the potential of an expanded concept of painting, a feeling for setting cultural reference points and the formal language of urban and contemporary worlds.

Laurentius Sauer continues this chosen artistic path consistently and not without a wink.

Which artist most influenced your work and you as an artist?

Matthias Dornfeld and Sergej Jensen, in particular, shaped my artistic work. I was fortunate to have had Matthias as a professor. I like his approach to painting.

What I appreciate most about both these artists and their work is their diversity.

If you come to recognize one artwork, it doesn't mean you will recognize them all.  It's quite astonishing, and this diverseness appeals to me.

You share a studio with the artists Timur Lukas and Esther Zahel, what's that like? Was the constellation an accident or are you, friends?

Yes, I work with Timur Lukas and Esther Zahel in a 200+ sqm studio. That was a conscious decision.

I know them both from our studies at the ADBK Munich, sharing a studio with them was the most obvious next step. I also work together with Timur on joint pictures/editions, which is called DUE TWO.

We work well together, and as soon as the museums are allowed to re-open, our opening of the exhibition DUE TWO Fries will take place in the Mewo Kunsthalle Memmingen, there will also be another edition accompanying this.

Is your present studio ideal? or do you wish for something else?

It's actually quite okay, could be warmer though. Haha. A studio in Italy on Lake Como, now that would be something...

When do you work best? Alone? Loud music? people around?

I work best, when I can fully concentrate, this usually happens in the evening when I'm alone in the studio. I play loud music, drink Cola and off I go.

What effect does being on Instagram have for you as an artist?

Instagram has become a work tool for me. It's hard to imagine how things would be without it.

But one shouldn't take it too seriously, because there are often huge differences between works on IG and then when you see them in "real" at an exhibition, here the quality can vary too much.

Also, followers/likes don't really say anything about the quality of the work. Nevertheless, it remains a good network and presentation tool.

How do you find inspiration? Do you stand before the canvas and it happens? Or do you prepare with sketches and think ideas through?

I don't tend to make sketches of ideas , I rack my brains for days and then stand in front of the screen in frustration until I notice that it isn't working.

There is a scheme according to which I work, I change it here and there now and then, but basically. I give a lot of room to chance. Ideas and concepts develop overtime for me.

I can't paint Lucien Freud's nudes today and cover the Siegestor in Munich tomorrow, but if I could that would be incredible.

What artists inspired you? Did you grow up surrounded by art or did you discover it later?

I grew up in a village with 700 people and at least as many cows and chickens, next to the house there is a forest and a stream.

When I was 12 we had a TV but it only had 3 channels. My focus at the time was more on building treehouses, fishing, making fire, running, climbing, and exploring nature, these were my past times.

That's why I would say nature is a great inspiration as well as things that keep coming back to me.

I mean, among other things, the mechanism of action of pop (culture): The principle of topicality and the striving for the new: Being up to date is essential. Most of the time, the ideas appear revolutionary and simple.

Artists who inspired me are Jensen & Dornfeld, as already described above, but I would also include Joan Mitchell, Polke, Twombly, and Katharina Grosse.

What effect did the lockdown have on your work?

In general, I can say that I don't meet a lot of people, so isolation & lockdown is no problem for me.

Of course, exhibitions have been canceled or postponed, which is stupid,. On the other hand new online media and online auctions have been taking place, which is good. Where there is light, there is also shadow ... haha.

When the Museums are open again Laurentius Sauer and Timur Lukas plan the opening of the exhibition DUE TWO Fries at the Mewo Kunsthalle Memmingen, Germany.

A big thank you to Laurentius Sauer for putting his trust in us and sharing his story and his remarkable work with us on our platform. 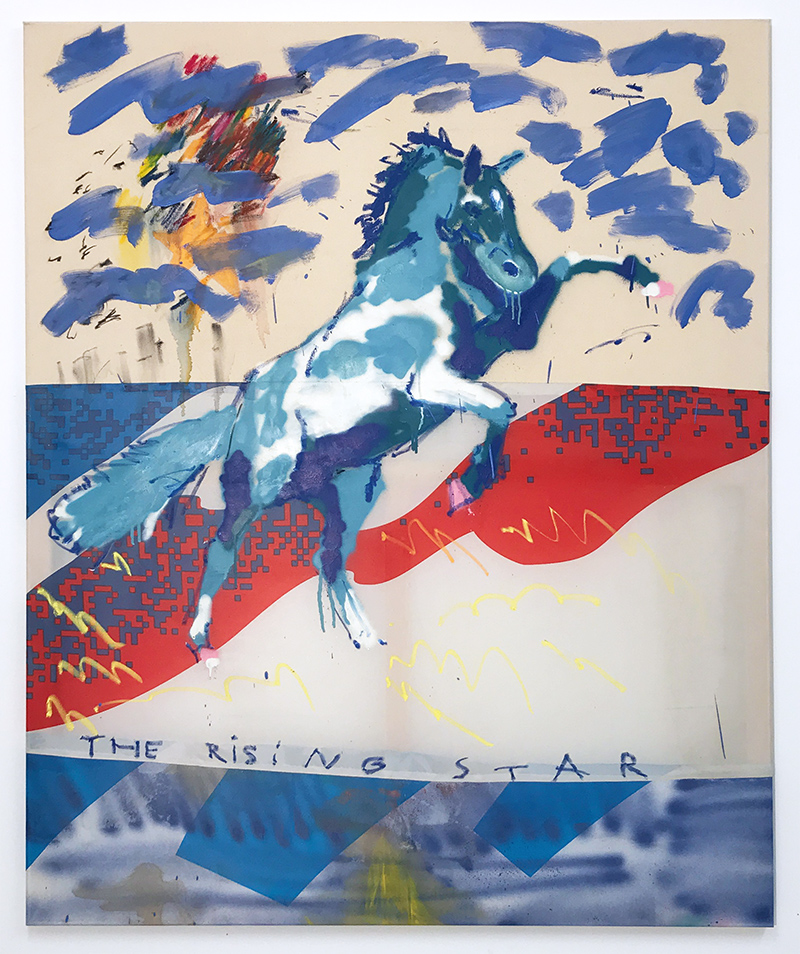 Laurentius Sauer | Zeitgeist
We introduce to you the gifted featured artist Laurentius Sauer. Learn more about the artist and his work. Follow us on Instagram to be kept updated on our shooting stars. 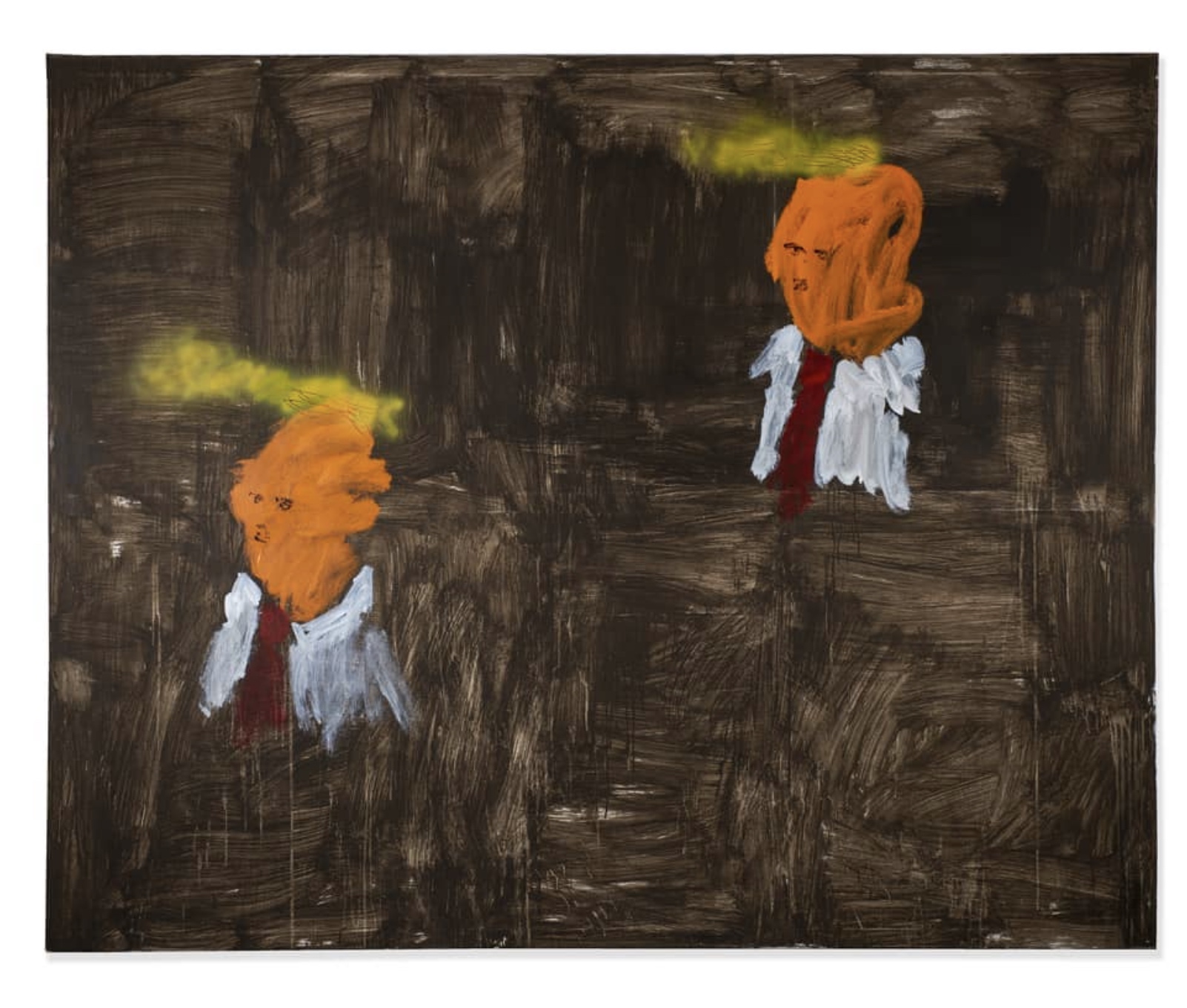 Who is Mathis Bauer ?
We proudly present, Mathis Pauer in our brand new section: featured Artist! Follow us on Instagram to get recognized. Discover more -->
All Viewing rooms
Grow + Work with us
Today is a good day! One klick away from your opportunity to grow and work with us
Start Now