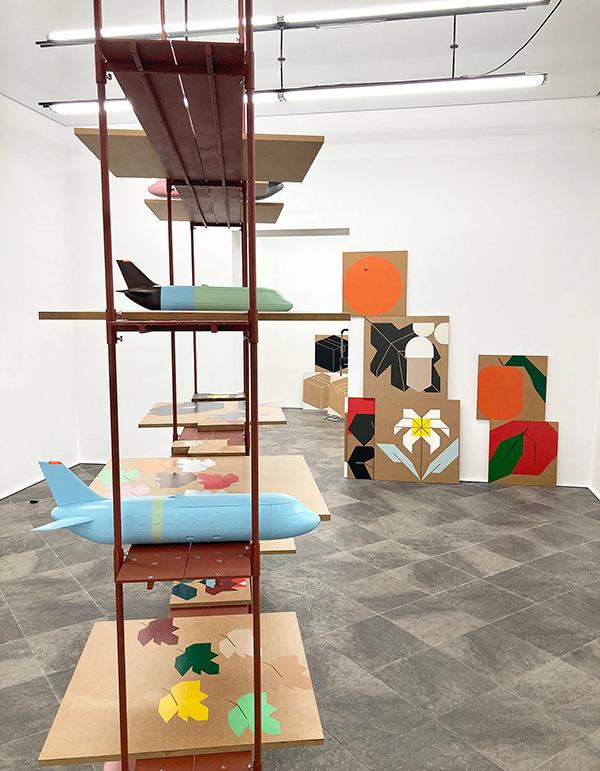 We proudly present the solo exhibition of the very talented artist Siggi Hofer at the Ve.Sch  Kunstverein in Vienna.

Italian born Siggi Hofer lives and works in Vienna. He studied art at the University of Applied Arts in Vienna and has since been lecturer at the technical University in Vienna as well as a visiting professor at the University of Applied Arts.
He spent 4 years as part of the Los Angeles based collective RAIN, a group of artists, curators and architects. Siggi Hofer uses drawing, painting, sculpting, video, installations to express his analysis of social processes and visual phenomena.

Siggi Hofer together with Katharina Fink, is artistic director at the Kunstverein Schattendorff an offspace run by artists in Lower Austria- Niederösterreich.

When we look into nature, it is presenting itself to us in colours, forms and smells. Not a single animal, nor a bush, nor a fruit, nor a flower, nothing is without them.

The more we look into, the more we see diversity and plenty. It seems the realm of colours and motifs is conspicuous, rich and multifaceted, in a way that one is obliged to distinguish, to compile, to make a choice in order to get an arranged picture.

Light in itself is what makes colours visible for us. It lets them appear in front of our eyes like magic.

Boxes will be piled or torn open. Products will be sorted. Chosen ones will be bedded softly. Very deep down lies the memory and it will constantly be overlapped anew by other delicacies.

There is this rule that the heavy things have to be placed below and the lighter ones above in order to not crush the latter. The good face always turned upside, like this the labels are visible and readable, the motifs really catch one’s eyes and shine in the fairest colours.

The orange, the cherry and the grape, on the bottle, the can or the box, they all rival with each other and compete for attention.

Only the pineapple and the shrink-wrapped bacon speak for themselves and rest in harmony and peaceful neighbourhood.

Down to the bottom, directly through the wood wool, slowly trickles the heaviness, the stone on the chest, the burden on the soul, the cross that everyone has to bear, the bottle of whiskey, the flask and the very good wine, the stereotype, coated with bitter, jet black chocolate.

Still deeper lies the lost and forgotten believed, but also pathos and kitsch, from the serious kind, the being trapped in one’s skin and the pain of silence respectively the anger of having kept the silence.

Everything that simply can never be mended. Things you said in a wrong moment to the wrong person with the wrong emphasis lie also there as well as the replayed scenes that are completely senseless and only torture.

And the great distance in the crucial moment. Inability and disgrace cavort about down there as well as failure and aggression, and the action that came along with.

When you dig in profoundly into the thick of it with your whole arm, you can feel the red head and the green face, the clenched fist, the flat hand, the pointed knee, the foot and the head, hard like a nut, that is cut loose.

The whole family has ensconced themselves down there lurking and waiting for the right moment to cleave again up through the wood wool. The suitcases stand in the hall.

They would have been packed for nothing if the family, much to their delight, were able to grasp you in a moment of inattention and drag you down into their midst. Then you would be sitting on the divan in the kitchen and crying your eyes empty accompanied by the chattering of the sewing machine. Even the father, who is only an image on a photo pulled out of a drawer, is clinging to the bottom down there. His clothes are full of dust from a day’s work.

His weariness gives him that special nonchalance when leaning on or standing at the counter.

His jeans couldn’t be tighter, his chest hair couldn’t protrude more lush from the widely opened shirt. A whole room is emerging, a bar for men, sweat and the smell of beer included. The father mimes the seducer.

With one hand in his crotch. In the adjacent room there is a huge studio. And in the middle of it; a seeker with a brush in the hand who is looking sometimes out of the window and sometimes into himself.

It doesn’t matter what he thinks or what he brings on the canvas — whether it is the cat, the jug or something from behind or above, whether it is the landscape, the fruit basket, the still life or the portrait of the grandmother — he only paints himself.

The mother, the lighthouse, the conductor, the dignity has an overview of everything and is invisible if needed. And the fruit of her womb, the child, that has rent the fantasy and always sees ever changing figures in the cigarette smoke, was there in the midst of men and now, so many years later, is like the mother and crosses the legs like she did.

The mayor rushes in to bring a bunch of flowers and, yet, stays there for a while taking some time. In turn, that sumptuous bunch opened a whole new world, like the confection which bummed around neatly arranged in a box all those years.

Even more splendid is the bunch of flowers that is pictured on the box. With every year it fades more and more, however, when you brush over it with the hand, you can feel it as always.

In every corner, through every crack, it smells of coffee even if you did dig yourself into the very bottom. Right down there, the temperature is perfect and constant.

You just don’t think about it. All around the colours shine. The shades determine your state of emotion, make you feel cheerful and sadden. In its imagination, a human being is able to let pass the brightest, most vivid and most pleasant colours even in the greatest darkness.

Once the eye, to be specific, has looked into this hotchpotch of colours, these stick forever, and in a moment of alertness the faintest impulse sparked by the action of light will get him to make a choice to see only that single colour which is especially important for him

Everything passes by like on a conveyor belt. It’s the same with smells and sentiments. The flat hand, that lands in the middle of the face and still hits the heart, becomes present. Compassion is bestowed upon the child that doesn’t exist anymore.

The child with the unspoiled gift to rejoice in a way that all the hearts around it break. The child which is capable of crying so bitterly that its teardrops bring the sea to overflow.

However, wish and fascination do not primarily lie with overflowing, but rather with conflagration.

The dream of fire in which the house is destroyed to its foundations, the dream of a subsequent message which says that the whole family except oneself perished, this dream awakens anew.

You couldn’t have heard any screams ... Help was futile, but then, finally, the long desired moment came, the climax for which everything was worth it, exactly when the neighbour put her hand on the shoulder of the child thus signalising her deepest compassion, and with this suspired the indelible sentence, “You poor creature.” For the time being, paradise lies in the hollow space behind the window frames that are abandoned in the cellar.

All this diversity, coming from the past and the present, collected and draped here, presents itself as a sea of colour. The joy about arrangement and clarity lights up the inner structure. Through the eye, the impression is directly let into the emotional area and exactly there creates vibrations that make happy and are life-affirming. Life as a braided trophy richly filled with specialities from all over the world, handed over with best wishes and in rustling cellophane.

Ve.sch is a artist offspace founded and run by the artist Marin Vesely in Vienna, Weyringergasse 40/25, in the 4th district.