Ernst Koslitsch | We have to move the Island 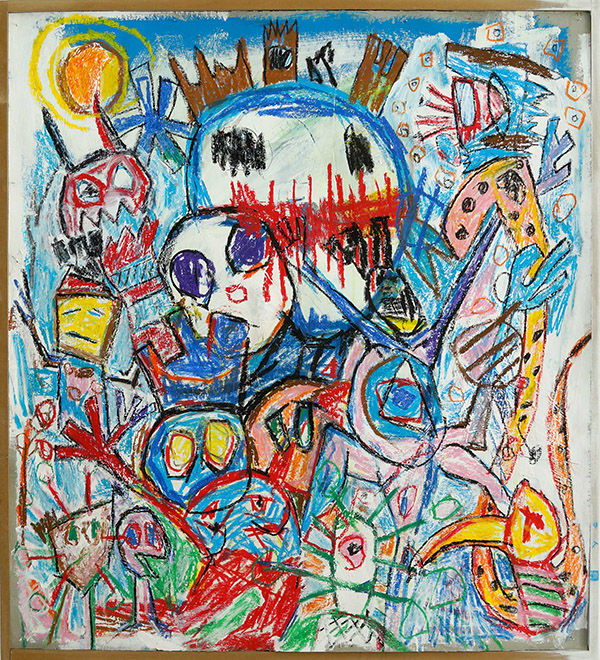 Ernst is back, or was he ever really gone? In his mind he was on an Island. In the middle of Vienna, in the small district Währing. Then came the invitation from his gallerist Josephine Wagner owner of the gallery Raum mit Licht to exhibit his new work. The titel for his next exhibition had already formed in his mind - "We have to move the Island".  Its a line from one of his favorite TV series Lost.

His art categorized under constructing mythology and yellow universe, both simulated places (like his Island) partly reality and partially made up or connected. His Island inhabited by real people, whom he meets when in his studio.
‍

On his Island he scrutinizes his ideas, discusses them, researches and discovers, leaving imprints of it all in his works. Creating almost daily new mysterious sculptures , paintings and drawings of dancing figures, wooden sculptures made from yellow wooden panels covered in Ufo drawings, creating fake-history.

Within one space he created an Island, mythology and endless universes, expanding day by day within a small radius, his mind and creativity never at rest.

Artworks " We have to move the Island" | Ernst Koslitsch

Ernst Koslitsch studied Photography at the University of Applied Arts Vienna and Performative Art and Sculpture at the Academy of Fine Arts Vienna. He graduated 2010. Ernst Koslitsch started with photography. For this he constructed models which he photographed. He was interested in the social dimension of living, the construction of images and the expandable photographic concept and its perception. In 2017 he began to paint with the simplest of means and concentrated more intensively on drawing. His yellow wall sculptures have the collective term "Yellow-Universe". They are works made of yellow used Doka boards, which are used on construction sites. Between 2015 and 2019 he created large three-dimensional wall sculptures from them. The content of his works is about perception, conspiracy, manipulation and deception. He also deals with fake news, UFOs and topics such as Star Trek and science fiction.Koslitsch has been awarded the Emanuel und Sophie Fohn Stipendiums (2007/2008), an award from the Province of Styria, and the ECB Photo Award. After he gave up his career as a chef in leading restaurants worldwide.Since 2001 he has been represented at several solo and group exhibitions