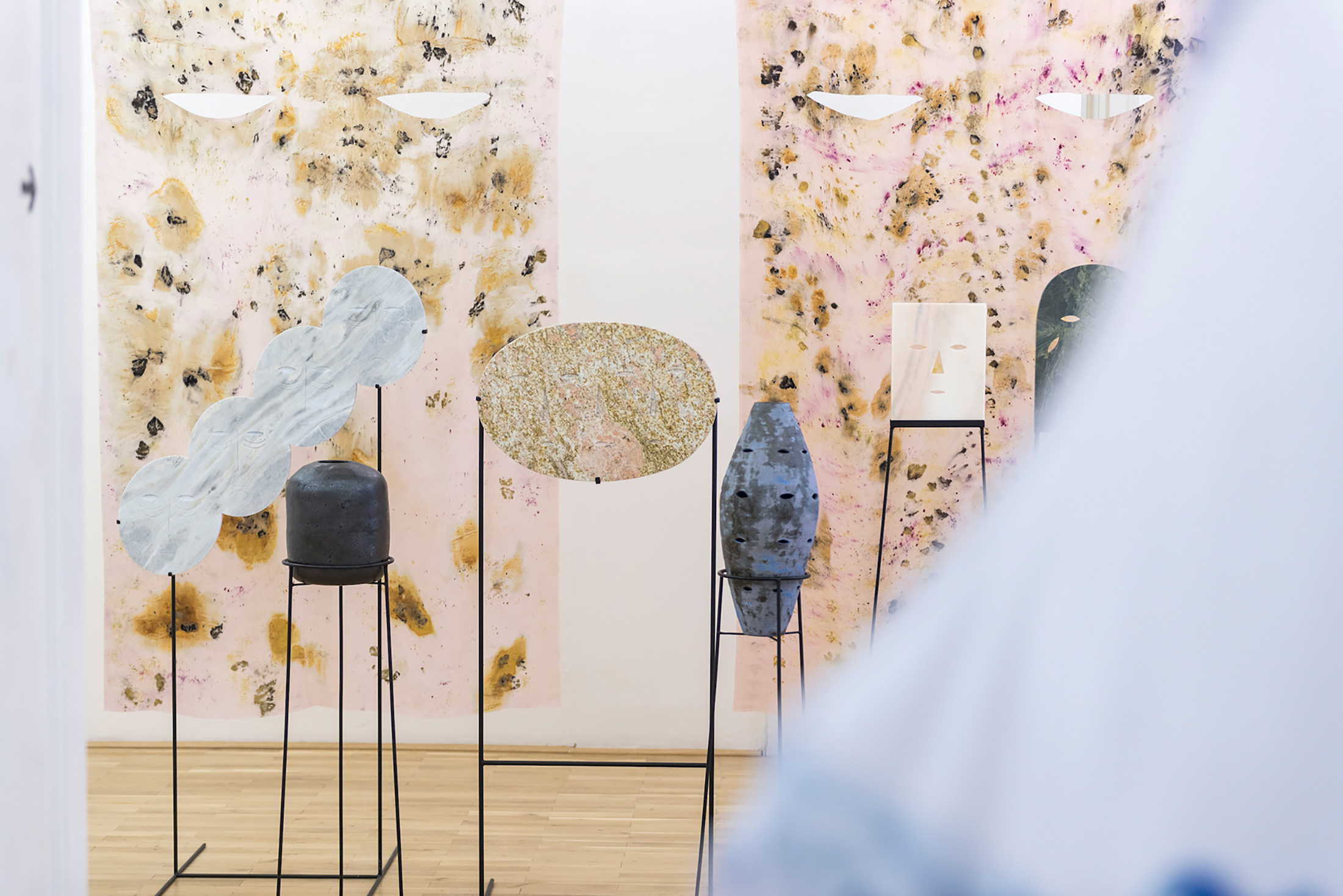 Munchies art club is happy to present the ongoing exhibition curated by Michal Stolárik at the gallery Ján Koniarek in Trnava, Slovakia.

The international exhibition project Antroporary responds to anthropocentric and anthropological tendencies, motifs and elements in the works of the current young generation of artists and art groups in the domestic and international environment.

The international exhibition project Antroporary responds to anthropocentric and anthropological tendencies, motifs and elements in the works of the current young generation of artists and art groups in the domestic and international environment.

Their interest in themes related to man, his corporeality and figural depiction naturally stems from social atmosphere, directly influenced by the political system, social pressure, the media, hoaxes, social networks, and modern influencers.

The subject matter, updated with the sentiment related to the consequences of the recent pandemic, accelerates the urgent need of physical contact and meeting other people, as these have, naturally, become scarce.

In the post-corona world, introversion is thriving and the impossibility to live as usual is challenging one's own needs, chances of survival, and dependence on a healthy and prosperous environment.

What's the real extent of our decisions? Is man still the center of the universe? Is this age favorable towards individualism or prefers collective efforts?

The exhibition reflects selected themes that are directly related to the body, corporeality, and man. It naturally graduates from banal or ironic approaches, pseudoarcheology and personal mythologies to serious political issues, matters of inclusion of marginalized groups or vanity, and the consequences of (negative) human impact on the environment.

Due to the diverse range of subject matters related to man, various authorial approaches and fluid tendencies in contemporary art, the exhibition forms one complex unit.

It has no beginning or end, omits traditional and established institutional categories, and creates a visual collage that stretches as an organic installation in Jan Koniarek Gallery in Trnava.

The concept of the section responds to social disputes about the objectification of bodies and the relentless effort to define the standards of beauty.

Categories such as anatomical accuracy or realistic depiction have long since ceased to be the defining features of quality in visual art.

Recently, organic "imperfections" and tangible inspiration from historical archetypes and ancient cultures have been flourishing significantly.

This tendency is confirmed by monumental oil paintings and small drawings by Czech author Pavla Malinová (1985), who pays tribute to the modernist figure.

Her robust, even cumbersome characters naturally oscillate between the physical and symbolic world, combining intimate and banal subject matters with universal ones.

The inclination towards sculptural representation of painted figures extending into real sculptures is represented by Slovak visual artist Boris Sirka (1981).

His shapeless beings that don't have much in common with the human body exude a strong surreal atmosphere and metaphorical representation of space between the universe and the inner world of man.

The works of Anna Hulačová (1984), a prominent representative of contemporary Czech sculpture, aim to redefine current figurative art, which has long been burdened by religious history and political ideologies.

Her sculptures are inspired by mythology, Eastern cultures, folk tradition and Christian symbolism combined with the language of contemporary art, as well as a hint of surrealism.

Vojtěch Kovařík (1993), the representative of the youngest generation of Czech painters, continuously processes and updates timeless stories from Greek mythology.

He fills his monumental canvases with oversized figures of ancient heroes and heroines, which he deforms to fit within the frames of his paintings.

In his latest series, Slovak painter Adam Šakový (1987) adopts figural scenes and details of the less familiar fragments of the most acclaimed European late Renaissance and Baroque sculptures.

He combines them with levitating "stone" objects, which change the nature of the scenes with their spatial qualities and cast shadows.

The Identities section elaborates on issues related to examining, searching for and creating of one's own identity. Naturally, this section asks what or who defines us, to what extent we can be authentic, what are our roles and positions in today's society, and what it means to be human in the 21st century.

The works examine how history, hobbies or fetishes affect us, considering personal spirituality or cultural and social predispositions. They create symbolic portraits and self-portraits without the necessary presence of the specific characteristics of the depicted individuals.

It is no coincidence that the majority of artworks adopts historical elements and excerpts from the history of art. At the same time, the obvious archaeological aesthetics outlines the themes of the ephemerality of human lives and what we leave in the world after our death.

Artistic entity Lőrinc Borsos (born in 2008 and formed by Lilla Lőrinc (1980) and János Borsos (1979)) raises questions of self-identification based on their Hungarian identity.

Their existence is based on bipolar gender, sexual orientation, and intellect. Their multimedia works deal with the coexistence of a couple in one identity, dualism, and conflicting opinions.

The mosaic wall composed of white plaster elements evokes fragments of bodies that have been kept underground for millennia.

The symbolic excavation site shows the infographics of characters captured in movement, which were created in response to their own morphology. The result is a "social puzzle" which, despite its diversity, forms one solid whole.

The objects, spatial interventions and painting installations by Czech author Šárka Koudelová (1987) examine the perception of cultural identity, its fragments and ideological contradictions.

The author works with issues of cultural appropriation while dealing with the ephemeral nature of our existence (fragments of the body) in contrast to humanity's relentless effort to gain social status (jewelry and other forms of beautification).

In addition to their solo work, Austrian artists Titania Seidl (1988) and Lukas Thaler (1989) have recently began to develop a joint artistic practice.

It is an absurd dialogue between objects and paintings about the possibility of being not only the head, but also the rest of the human body, forming a "full-fledged" person.

Sári Ember (1985), born in São Paulo and living in Budapest, continues her exploration of traditional portraits in her spatial installation of marble objects and hanging textiles, which she reduces to basic elements.

Additionally, her simplified emoticons, which refer to specific individuals from Ember's immediate surroundings, outline the theme of self-identification in society, which is often associated with using masks and trying to be an expanded version of oneself.

The works in the Body Politics section discuss (continuously) sensitive issues stemming from the current political and social situation, which emphasize the consequences of our decisions while encouraging a more pragmatic mindset and openness to topics that are not commonly covered by the media.

The artists draw attention to the existence of persons with physical disabilities and the inclusion of queer minorities, ask questions related to religion and faith, follow dance politics as well as the impacts of neocolonialism and human production on ecology and the state of our planet.

The selected two short films (Diva and The Rite) integrate fashion visuals with inclusion of the LGBTIQA+ community and persons with Down syndrome.

The soft patchwork objects hanging from the ceiling contain author's photographs printed on fabrics produced by the Czech company VEBA, which, however, are intended exclusively for the African market.

A short and visually appealing video essay explores the cultural and social tradition of gifting Red Naomi roses. They are grown by an African producer and then delivered to Europe, which not only has a catastrophic impact on the environment, but also leads to frequent sexual abuse of workers, whose bodies are exposed to harmful pesticides.

Slovak visual artist Kristián Németh (1983) continuously devotes his work to criticism of the Christian church. The exhibited installation responds to the bizarre event of 2002, when a two-meter Renaissance statue of Adam collapsed in the Metropolitan Museum of Art in New York.

Despite the fact that the restorers managed to save the fragmented details and pieces and bring the statue back to life, the author was inspired by this random disintegration to symbolically depict the undermined foundations of the church and its inability to adapt to the needs of today's believers.

Bogomir Doringer (1983), a Serbian artist and curator working in Amsterdam, studies dance floors around the world in his long-term project I Dance Alone.

From a bird's eye view, he observes individuals as well as dancing masses. Their behavior, nonverbal communication, interaction, movements, choreography and gestures can be seen as a mirror of social, political and environmental changes.

The author asks where, how and why we dance the way we dance.